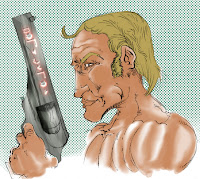 Here is another quick drawing... Well not really that quick, just a WIP.
Guns are once again featured here. See a theme?
What has happened is a reflection of what my young ones are doing.... They of course are doodling swords. So I end up doodling guns. Go figure.

The idea here is he is as awesome with the gun as Billy the kid, but the gun itself is far more then it appears. It is an enchanted weapon. It is extra large. It is basically a hand cannon.Some people suggest he is compensating for something. But to say that is to walk away with an extra whole in ones head.

BTW - The Gun is named "Incumbent".

Pretty funny. The gun idea is loosely based on the first nations natives (Indians)version of the talking stick. Except the guy with the gun get to hold office. It is pretty hard to disagree with the guy pointing a gun in your face.