A few days ago I was pretty down. Now I'm faced with the old saying of... Be careful what you wish for. No matter how bright I shine I'll be in trouble one way or another. I figured another youthful adventure was in order.... According to the sorting hat I have a house. Though I once was part of Hufflepuff it looks like I'm getting to nice again.

Ah well... More sketching, more designs. I suppose my lot in life is to make other people wealthy and my main job is to encourage others. So be it. At least I have a start.
Posted by G-man at 3:14 PM No comments: 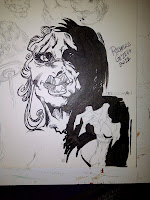 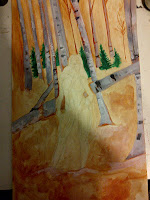 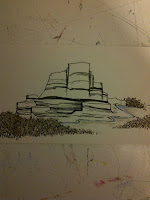 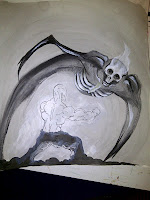 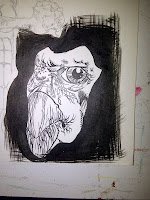 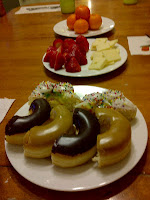 Here is what our Sunday morning table looks like every single Sunday...
well, almost. We take pride in having every dinner together and breakfast once per week with the whole family. It is not always doughnuts, but may be replaced with pancakes, more often then not waffles and always a wide variety of fruit.

It is a small pleasure we enjoy that allows us to accommodate unexpected guest. We never have morning guest, but if we did the sample spread would easily accommodate another 4 people or so. We are probably the only morning week end people we know. Who else looks forward to getting up at 6:00 am ish on a week end... Well we do if we know we have this spread waiting for us.

We have to make it our selves. We are not pompous wealthy brats. We have to sweat for our food. But I thought that this might be worth sharing with others who want to find a way to improve their every day lives. This is one event that makes the next day a little more brighter.
Posted by G-man at 7:52 AM No comments:

What can you do when your best honest attempts are all but thrown aside... What do you do?
Well I really do not have such an answer.
I will say that I decided to make Greek food... Yes Greek and it turned out fabulously. So while I shaked and baked and I drowned my sorrows in a Greek like feast, I realized there may be more to this whole world conspiracy against me at the moment. Over a year with out work is not good. More to the point it is pretty darn annoying to have to be faced with the troublesome bills and mundane aspects of life. I certainly am getting pretty nasty in temperament and just plain tired of the challenging bureaucratic hurdles I need to dodge through just for a chance to make a few dollars.

After a second day of delightful food I have to admit, a good meal makes personal challenges a little more tolerable. Still I have no clear designs for a future of employment. Sitting at home job hunting is not a joy that I share with anyone. The trials are personal and the depression is clearly starting to get the better of me. I truly hate the mundane aspects of life with out a chance to experience more. Currency is truly the only tool to experience life on any scale beyond ones own internet connection...... I suppose I still have to toil on. I just can't think of a better way to get more connections that are valid. The whole facebook world is so full of fluff that I can't be bothered.

I just want some results.

I suppose another serving a Greek may be in order too.

- enjoy your week.
As always, I'm home alone, with the internet.... waiting for a positive response.
Posted by G-man at 10:29 AM No comments:

Well what a chore that was.
Working in the digital format is only 100 times faster then the traditional way. There are however draw backs.

In the center of the page at the bottom is a sample of leaves I left in place to ensure correct color codeing.

After a sketch and several color samples I found that a single brush would never do. Still I stuck to a single brush and used a variety of sizes to get this piece done. I found the impressionist way of working to be the best way when doing a digital painting. I played with a few other ideas like transparency as well as multi-layers for a final piece. This is what happened when I flattened the whole thing instead of saving it as I wanted. Many of the effects were lost.
I'm please with the piece but you can see thar I rubbed, dragged and bleneded many pointillism colors to get this look too. I think I need to try other things to really make this work!
Posted by G-man at 2:03 PM No comments:

A problem with Comic Reviews...

There is a nasty problem with comic reviews where if a comic is not good, no one offers a review. If a comic is good they offer a review with out substance. Today I'll offer a review, one that is going to be considered as equally naive by the fan boys and girls who read the rhetoric offered currently. My review will have items that are a little more in-depth then what they are getting from review people currently.

This review is going to be about the comic SAGA....

In all that is fair I will admit I will not buy this book! It is likely my good sense has fallen by the way side when put up against my fear of a poor script. It is also likely that I am getting old and frustrated by the constant repeat of story lines offered in both literature and pop culture. Though this review should include a positive aspect to be fair.

The Art displayed by co-creator Fiona is with out a doubt some of her best in a long time. Only looking at the cover and the preview pages online, I find it hard to believe that it has sold out, as is the claim by Image, the publisher.

If any thing I give Fiona full credit for the character designs and offering in-spite as to the contents of the full story. Having studied History and Art history I'm immediately brought to the idea that perhaps we have a tale about Cleopatra and Alexander the great. The first hint is the male character depiction much like the old coin representation of the man himself.

Now the whole space alien theme is a neat twist. The question is, will that be enough to carry the whole story? For me the answer is no. Already there are similarities to Star Wars in the preview. I mean the main character dresses like Han Solo, at least on the cover.

To seal the deal I just need to see that the female character speaks like Cleopatra, a second or third language and refuses her own local dialect. You'll notice in the painting Cleopatra and Julius Caesar to the left, That the main character has a similar gown skirt. Of course using black instead of the paintings white gives the character a little more of an edge. Both Cleopatra and the main character have short cropped hair that is dark, adding to the alluring factor of the stories character. Her pose is less suductive and more one of a person of authority figure. Again hinting that Cleopatra is very much part of this character. The question remains is if the main female character will take on a lover if the male counter part dies to ensure the survival of her child.


The whole baby introduction reminds me of Star Wars. I mean we have a hint of a slave struggle in the preview. We have a child from two places and races that clearly will impact the story. By the way Witchblade also introduced a child in there story line.

Sara's mystical daughter with Jackie Estacado. She is neither of The Darkness nor The Angelus, but has unknown powers that are currently dormant. In Artifacts, Hope is the subject of a massive search by artifact bearers following her capture by The Survivor — it is during this search her parents, Jackie and Sara, finally consummate their feelings for each other, and Hope's nature is revealed by The Survivor; Hope is the "Codex" for the entire universe, meant to survive and ensure its survival. The Survivor plans to kill and replace her as the Codex to guarantee the resurrection of his own universe. )) - Found on wikipedia.org 2012

I don't feel compelled by this book, other then the few glimpse of art, I'll wait to download those visual goodies when they surface on the internet.

This looks to be a visually interesting book. Again that alone might justify the purchase. Still I simply have been exposed to far more history then I care to read again in a fictional tale like Saga. I would rather go see this book as a movie. Kill two hours of my life staring at a mind numbing screen and maybe having my soul stirred by the visual effects. The boost in testosterone for those brief 2 hours might be more worth my while then actually reading this book.

I hope the book does do well for both the creators. Still, I feel the larger effort was put on the artist shoulders here and the writer may have just regurgitated what has already been done in Star Wars, Witchblade and history as many of us have already studied it.

But don't let my review stop you. I mean when was the last time you all ran back to university just to learn about ancient Rome or Egypt? This may be the book for you if you need more of the same.
Posted by G-man at 7:35 AM No comments:

I thought that I would never get caught up! I managed to get not 1 but 2 new short tales up on the http://3deadkings.blogspot.com/

Just another blog to keep my idol thought and hands busy. I'd hate to think what happens when I think to much or to hard on my UN-employment. Still I beg when I can and try to keep myself productive when I can as well. I was never one to ask for much. I career might be nice though.

I seem pretty busy...
on the plate was a pitch to a game company, I'm currently writing 20+ pages for a game book. Also finished 2 illustrations and working on a cover for said book to help push the product along if it should be accepted. Cover should be completed this week. I hope to have 40 pages written as well.

Children activities planned - Oh and did I mention preparing for an interview?
Yes I sure hope it all works out.

I expect that the book project will not get a response for a few month though. That give me a whole bunch of time to complete a ton of writing on the first draft, which of course I'll submit for feedback and more refining if approval is given.

The product I use to clear coat work is called... "Varathane" "Diamond Coat"

It has a strange separation until well stirred. That is what spilled on the picture. You will notice the milky color and the liquid separated. That's what happens when it is not mixed well prior to application. I sure hope I can fix the book mark. I was planning on using it for a book I picked up.
Posted by G-man at 11:45 AM No comments:

I wanted to get a writing pitch out of the way, and decided to do a small illustration to spur the inspiration on. This was 60 minutes of sketch and paint that ...well...... It started good.... Then I was getting ready to put a clear coat on the piece until I spilled the varnish on it. Needless to say the paint was not dry, the inks not set and the mess began.

- Enjoy the trials of another struggling creative person.
Posted by G-man at 11:16 AM No comments: