As an independent book creator and illustrator, searching for the truth of attaining a best seller by going on the trek alone. Form concept to completion, the goal is to see if I can make the two top best sellers lists.
In Canada the goal is to attain 5000 sales to make the best selling list in that country and in the United States the goal is 25,000 copies sold. Having produced a verity of works I want to see if he can break the total of One Million from sales in these two country or more. In a discussion with other authors, I have set a goal to sell al least 1000 copies in every state and province of the world. That would not only break any historic records, but also shatter any that have ever been posted ever before.

The Best way to support this effort is to pick up your own copy of one of the works.
Here is the link

http://www.lulu.com/rgrzela
the blog is at
http://Psikik.blogspot.com
Posted by G-man at 10:52 PM No comments:

The link leads to the strip I did for Spells and Whistles. They loved the piece. So for those of you that can not find my effort. Just click the link.
THese guys do great work them, selves and work far slower than i do. But the results are un-deniable. It is always a great piece.
Posted by G-man at 7:29 PM No comments:

Awards are over and now the big trades are happening. We just have to see if things get better or worse for the game. An in no way should Luongo get the same pay cheque as Brodure. Kipper should but not Luongo.
Posted by G-man at 2:19 AM No comments:

I love the game. It's nice to see Kipper get the goalden cup for goalies, but I really want to see if the defence can break the the rookie award.
The watching continues.
Posted by G-man at 8:11 PM No comments:

In an effort to get more recoginition for my hard work on my book I have devised a series of small witty posters to draw attention to them. Although they are rough. I still think they have a charm all their own. I will post them here soon.
Posted by G-man at 9:44 PM No comments:

I have no idea how distribution works. But if any one wants to buy and distribute my book they can do so at.
www.LULU.COM/rgrzela

For every one else, you will suffer from creative blocks, loss of hair and stress that never leaves you, untill you buy these books. Now I must sleep.
Posted by G-man at 7:31 PM 1 comment:

Book is published, get it now! 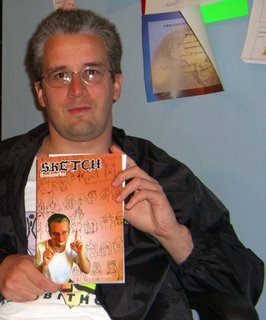 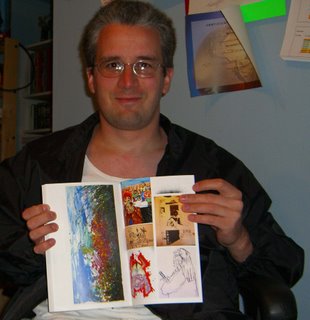 SHOCK and Contentment, That is how this process feel to me. And to fianlly have the piece in my hands. Wow! A thrill beyond words I can only hope you all join in the work by picking up your own copy soon.

It is a great inspiration builder and coffee table book. Every one who picked one up loves it so far.
Posted by G-man at 9:24 AM No comments: