That was my weekend. On another positive note, across my web sites and Deviant watchers after nearly 8 years of blogging, web site making and being online, I have a whooping 4 dedicated followers. That is pretty impressive.
I wonder if the new comic book had anything to do with it all? Read it here...

There are a lot of amazing jobs/careers out there. People have asked me what I think the best career is, my answer is always the same. Parenting is the best career in the world. It is 24 hours long, it can be thankless and your surrounded by people you love. I have to add it pays ZERO in monetary cash.

I would have had 50 children if I have the income to support the family. If your without a family or children you truly do not know what your missing. The advantages of children over not having children are pretty large in scale. What needs to happen is a rescaling of society moral views. Everything in life has a certain level of importance. Trying to measure it is a difficult thing.

Starting your own family is a very important and integral part of making a more rounded and brilliant person. Next time you tweet, try tweeting about family. Make it a priority in your life. Perhaps more entrepreneurs will then become a working part of that important piece of your life.

The only thing truly missing from life is the balance between work and life.
Posted by G-man at 9:58 AM No comments: 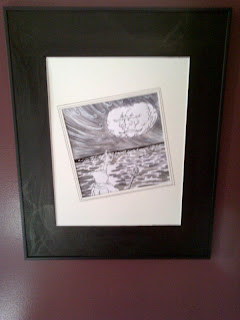 I decided to do an illustration yesterday. It was a small piece which took all day. The art was about 6 hour with planning finishing and lunch break. Then I had to prep the frame and create the second mat mount sheet with cut and outline. That took a few hours. Then Framing of the piece. You can see I went in a non-expected direction. I'm so tired of the straight on framing styles used that I tried to go out on a limb. I hope you like what I did.

I may submit this to an art show. I'm contemplating if this will fit the theme... Meh... I need to think this over more. 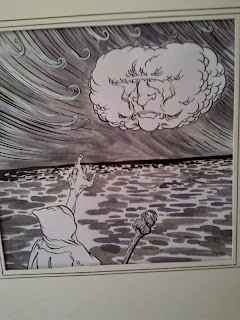 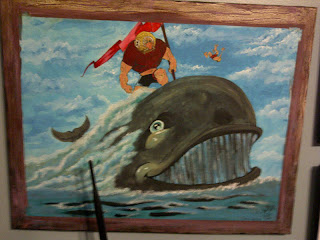 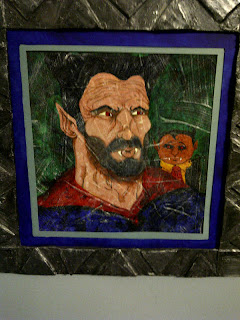 What hangs on your walls?
Well old art of course. Here are a few I like to look at on a daily basis. Reminds me of where I've been and where I would like to be. It inspires and makes me chuckle all the more.

I have participated in a few projects over the last little while that has kept me busy enough. For those of you that enjoy a rousing pen and paper RPG (Role playing game) then you might want to track down this e-publication for helping yo plan your game..."1372-roadside-encounters"

The second book I did art for. It is called "1985" which is a spin off on Orwells tale written years before. This one is really neat to read. It truly feels like a conspiracy theory unfolding too... It rolls off the press today and you should be able to get it a the local convention in Calgary at the end of April.

When I hear more, I'll share more about who to talk to and the final title of the anthology.
Posted by G-man at 11:35 AM No comments: 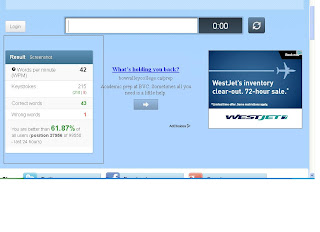 My fat fingers caused me to get one wrong. Still it is a pretty good casual speed to hammer down on a keyboard. Heck If I was doing the keyboard dance every day I could likely double this number. Still, this is pretty good for a stay at home Dad.

I've been really trying to keep the brain busy on mundane things. That means keeping myself sharp and challenged with math skills from old grade 10 text book and even practicing my good old typing skills.

I discovered Wizards had a sealed deck builder in the process. So I decided to give it a try and thought that the main goal is to have a ramp, for a strong 3 drop mid game. Here is what I picked from the pile of my pull.

It will not beat a standard deck but it sure will secure 2 wins at least in a local game club sealed event. Pretty fast to play this one too. You get to bombard your opponent until you draw a 5 or six drop to shift the game. Even if you don't make that draw, you still continuously hammer the opponent until you start getting health back through the game and possibly turn the game around.... Just watch out for those "Reckoner" and "Lords of the void". This deck would not last long against any 7 drop creature entering the field. 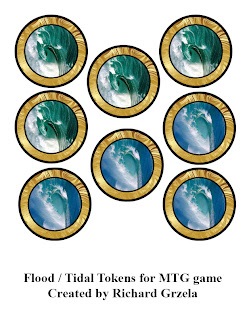 Long time friend inspired these. He created circular tidal/flood counters for Magic the Gathering years ago - 1990's. They were never produced by MTG back in the day. Since I had a little more time I decided to create these.
What you see here are low -quality versions of the final product that I recreated for old times sake.

These of course are a little like looking at a gambling chip you might see in some casino.

Speaking of Gambling...Since I'm not a high roller, I've only been to a casino 3 times in my entire life and gambled exactly $0.25 cents ever. Slots I tell ya - You have to try.

The lottery on the other hand has been good to me. I'v spend at least $1000 on tickects to date through out my life at random and won more then that back in free plays and Cash. Still most people will tell you that it is a big loss. I'm pretty sure I'm sitting at 45% return on cash though. That is pretty good for spare change in the pocket.

Some times when I need luck the most it happens. I hope I get a great job or a bit of lotto luck soon. 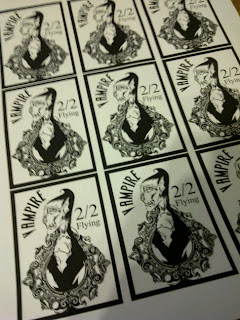 Here is a picture of an uncut sheet of vampire tokens. This was a ton of fun to create. I had so many idea's to try. Ultimately I wanted a very nostalgic Renaissance-1800's feel. There is a grand general term that eludes me at the moment for what I want to say ...  Ultimately I wanted nothing to modern, I did have a great edgy modern design too. Then I realized that these things are truly designed to be disposable. They should be B&W and easy to replace as needed. If anyone plays Magic the Gathering and would like a hard copy printed on 8x11 bond. We can discuss that option.

You heard/read right - Creating vampires. I'm in the process of refining my vampire deck for MTG.
I love the concept of blood suckers in the game. I just don't like the tokens that come with the game. I decided I would put my own creative flare to the cards. The best part is this game truly brings out the creative side of a pllayer on so many levels. Not to mention that it is a truely amazing educational tool as well....

I'll post pics of the completed tokens soon. Hopefully this weekend. Family activities are keeping me pretty busy.
Posted by G-man at 9:23 AM No comments:

I'm looking forward to the weekend. It signals the end of a week and the demands as well as a chance to have the family together for a little activities. I believe that the request was for a movie night. That might just happen if things are not to crazy. Children are off the spring break too. That means back to school next week. If you ask me, children like the routine more because of the predictability. The first week off is always great for them, the second week tends to drag. There is not enough time to get into camps and not enough time to really enjoy the time off. The only solution is then to just do what we want. THat for the little one tends to be getting into trouble when they think Dad is not looking. The look on their faces is priceless when they get busted.

That is the benefit of a small home...there is no place to hide. We as parents know all and see all - the stuff we don't see we hear or don't and that means it is time to check out what is happening. You need to love the antics. In many ways the children are a reflection of what we have done as children or the current events in our lives.

I have heard of the interesting concept of people selling off their lives. In fact garden centers and people in personal transition as well as more seedy folks sell life or themselves. In an effort to join the fray I too want to sell part of my life starting with this blog...

Yes - For a mere $38 million dollars US, you too could own this very blog. If your interested leave comments and I'll get back to you ASAP. I know that the list of buyers is long so please be patient as I vet the qualified parties out to ensure the smoothest transaction between all parties.
Posted by G-man at 9:59 AM No comments: 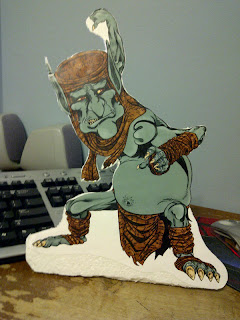 A few folks have bothered to ask where I have been... that is to say why have I not attended any conventions of late. Well I don't really have an answer.

Between 2008-2010 I made an effort to show my work and get noticed by a few publishers. Unfortunately those publishers suffered from the high printing costs and digital age transition. Many still are trying to figure out where all the buyers might be in the digital age. Since my convention days I only know of 4 people who personally "made it" in comics. Theses people just happened to be fairly well to do, as in they don't need to worry about paying bills in the same way the rest of us slobs do. With that said, those same folks have gone through divorce, had children and even hit other obstacles that was troublesome, but manageable as they were committed to comics.

I personally love my little family more then comics. I also need to work when I can as a part-time whatever to make ends meat. Currently a stay at home father finding employers that understand family life balances are very few and far between. Comics have always been a very secondary, if not third place task as time permitted. I would love to slave away for hours at minimum wage making comics instead of making minimum wage doing something I like far less. Still, real money in my hand now is more valuable then the pipe dream of comics 5 years from now. I'd love to do more conventions. It is not, in my view worth the effort to go to a convention if people are not buying my comics, or work in other forms or through other outlets.

Long story short - Here is the one companion people might have seen with me on my travels. It has held up surprisingly well over the years. This goblin was really my only companion on many flights and travels and even while I sat at a table in artist alley waiting for fans or publishers.

It never happened... yet - See I remain hopeful.