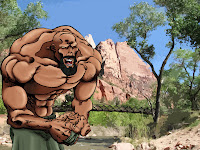 A funny little thing happened while traveling the street in -27C weather. I spotted a person carrying a gnome for a photo shoot. The camera in the other hand gave it away. I was inspired so I whipped up a few digital illustrations in two styles that might be found in animation, I then added a character illustration over top of that. The final result is pretty impressive by my estimation. I had no idea how it would turn out. I can only say that samurai jack was the inspiration for the end result.
Posted by G-man at 7:43 AM