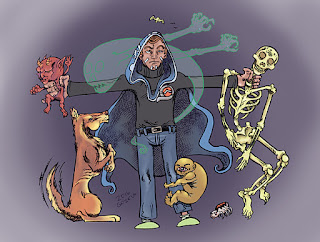 Pre-Release Horror of Sealed Pools
By Richard Grzela
You’re sitting at the pre-release table anticipating a great pull. Sure enough on the first pack you peel open you score a mythic rare Jace. Shadows Over Innistrad is looking like it is going to be a great event for you… or will it? Admitting that Innistrad was my big return to the game is nothing more than little embarrassing. After a strong gaming start twenty years ago, Interest faded to the point where I was only purchasing the odd pack after Mirage – I never really felt connected to the game until Innistrad. The idea that a whole plane was going to be dedicated to a great horror story over three boxes of great cards, all with a fun new mechanics left me giddy. I could live a zombie deck or a deck that was dedicated to the righteous, or even delve into the delirious minds of the blue deck. Flashback, Undying and Miracle were the three great mechanics that I hope to see again. Let’s not forget the amazing flip cards. Cards that power up and physically change. That was an awesome surprise! Now I have seen the spoilers and it is wonderful to see the flip cards are back. Thank goodness for some continuity in the block. What concerns me is the story being pressed into the two block set. Innistrad was the first block in my opinion to do the story of the set justice in every aspect. Visually stunning and game play matching, the idea that you never know if you were going to win or if the opponent was going to flash back a creature or spell captured horror and left players questioning their plays throughout the game at pre-release and into many FNM (Friday Night Magic). The big question mark is can you deliver the same impact in two box block set? We are seeing a different mechanic being introduced that is not really feeling quite as impactful as it had in the original set so far. With the visual spoilers in the novice stage we already have pro teams lining up potential decks based on previous incarnations. To think otherwise is silly, pro teams mastered the Eldrazi and were quick to exploit them. Unknown players rarely break the top ranks without heavy research. One person can do amazing things but a team can bring the best deck to every tournament. Arguably, pre-release is the most neutral and honest game moment in every new block release. So when you’re staring down the newly minted Jace you pulled from your first pack and pondering the possibilities of horror, let me share a few points of advice from a non-pro player. 1. Have fun. Build a deck that will give your opponent the most fun. Scare them. Drop the Jace and find a blended color that makes the opponent wonder what else they are in for. 2. Start with the common cards. What synergy or combo can your commons make to amp the experience for your chance to win. 3. Think beyond the original incantation color matches. Remember, Khans of Tarkir was three color time travel. Well that has effected all future return blocks in some way. We have seen it with the Eldrazi. Be daring with your dual or triple color combination. 4. Lastly, win with the same grace that you lose with. It is just a game. Be honest and have fun. Pre-release games are for everyone to learn and have fun in. Let new players feel embraced by the visual and game design theme. ~ Enjoy!
Posted by G-man at 4:19 PM