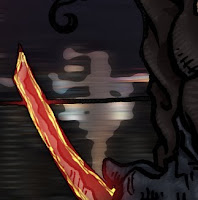 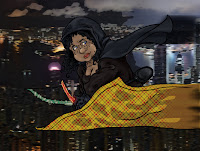 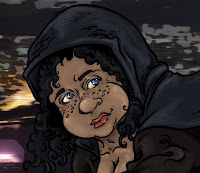 Cleaning out D&D!
This piece was inspired by my old D&D stuff. It was an NPC that I stumbled upon while throwing stuff out. As I read over the character I realized that I played this character more then I thought as an NPC to upset my players apple cart. After reading the stat block after so many years I decided to do a quick illustration of the little female assassin. She was a gnome and 12% dueger dwarf - hence the skin tone. A dagger of life stealing and a rune bow with about 10 other magical goodies too. All in all she could blend in as a little girl playing on the street with other children or use her size to the advantage when taking out other NPC.

I played the character as the one who eliminated all the NPC that were to useful to the players. Players that had enough cash to make things happen and enough lucky rolls to back up their words too. So I had this little ace in my hole to systematically kill off many of the NPC that associated with the player characters. It worked well. I even had the character interact with the players directly. They were to smart to poison though. They seem to be on to me. They never figured out who was behind the little troubles, though they never cared. They knew they could slaughter most things that reared their ugly heads at them. This character tried at least 6 times to poison or kill a PC. I have to say my rolls were never that great. Still this character could have done damage if the fight ever happened.

No this character only stole a few horses, missed a few arrow shots and failed to poison Players 3 times. Yes, it was troublesome. Still this character brought back a rush of good ideas rolled bad and she could have been a major player. People killed the dragon and that ended the game. The assassin, try as she might never had her chance to take out a PC. It would have been pretty awesome if she was more effective at rolling... Meaning my rolls of the dice were poor. enjoy the illustration.

p.s. yes she is on a magic carpet that looks like a picnic blanket. I never wanted anything threatening to be a real target to the PC. They spotted it once in the sky and began to make jokes... That was expected. And I knew it would not be taken as a real threat but just an eccentric character flying about their business.
Posted by G-man at 4:52 PM